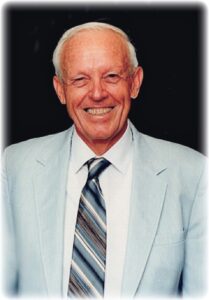 Andrew “Andy” Henry Abugelis, 99 of Leonardtown, MD passed away on Friday, June 10, 2022, at the St. Mary’s Hospice House in Maryland.

Andy was the youngest of six children born to Andrew Abugelis and Eleanora (Alonis) Abugelis in Chicago IL in June 1923.  After graduating from high school, Andy enlisted in the Navy and went through boot camp training in Great Lakes, Illinois.  Some of Andy’s fondest memories consisted of serving in the Navy on the greatest ship, the USS Yorktown.  He would say he served with the finest officers and sailors in World War II.  Andy received many medals and ribbons including the Victory Metal, American Campaign Metal, Asiatic-Pacific Campaign Metal and ribbons with five stars, as well as a Presidential Unit Citation, one star.

Following his discharge from the Navy, Andy married his high school sweetheart, Virginia.  They were married for 70 years until Virginia passed away in 2016.  They had three children, Gail Rudman (Martin) of Leonardtown, MD, James Andrews of Colorado the late Robert James.  He is also survived by his 4 grandchildren and 10 great grandchildren.

Andy enjoyed traveling and being with family.  In his later years, he was so proud to represent the Navy during multiple WWII celebrations held at the WWII memorial in Washington, DC.  During these events, he had the privilege of meeting high ranking members of the military as well as American Politicians and Senators, Bob Dole and John McCain, Vice President Mike Pence and actor and supporter of veteran’s organizations, Gary Sinise.  He was usually the last to leave those events, telling his stories and shaking hands with those who wanted to meet him. There was nothing he loved more than sharing his stories.  When people would say to him “thank you for your service,” his response would be “For you, I would do it over again.”

Family will receive loved ones for Andy’s Life Celebration on Monday July 18, 2022 at 11:00am at Brinsfield Funeral Home in Leonardtown, MD.  Interment will be held at a later date at Arlington National Cemetery.

Condolences to the family may be made at www.brinsfieldfuneral.com.