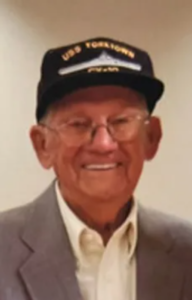 Passed away peacefully at home with his loving wife and son David at his side holding his hand on Saturday, August 13, 2022. Arthur’s memory will be kept alive and cherished by his wife of 72 years and final days caretaker, Marion (Dell’Olio) Chaput, his two sons, Arthur Chaput and daughter-in-law, Dawn of Texas, and David Chaput of Florida, grandchildren, Maj Colby (Chaput) Shufeldt and husband, Maj Peter Shufeldt, Capt Gregory Chaput, and many cousins, nieces and nephews.

In 1942 at the age of 17, Arthur began proudly serving in the US Navy. He served in the capacity of a Plankowner on the USS Yorktown CV-10. In 1949 He met married Marion Dell’Olio, the love of his life. A few years later he grew his family by two sons. Arthur was a true father in all aspects of raising his boys to be fine men in that they could emulate him in what a man should be. Fatherhood went well beyond is own two boys as many nephews and nieces will recall his impact on their lives from their educational endeavors, early employments, and E.R. runs due to typical childhood antics. With the Marriage of his first son to Dawn he became a grandfather of two, Colby and Gregory. The wearing of shirts, hats and jackets with Navy logos were worn with pride; however, the placing of shoulder boards and first salutes of both his grandchildren upon their Graduation and O?cer Commissioning at the US Air Force Academy was one of even greater pride for him.

After his years of Naval service, Arthur became employed by General Motors Assembly plant in Framingham MA. With the attendance of Insurance school he became an adjuster for GM and later Amica, where he retired at the young age of 90! Although not being a track star, he learned to out run many a canine through those years.

Hobbies he enjoyed were bowling as well as golfing. His early years held annual trips to Cape Cod with family as well as annual road trips through out New England. Later years his travels reached destinations such as Africa, India, the Northern West Coast and Alaska.

The most loyal and caring man to both family and friends, his knowledge of both plumbing and tiling brought about the renovations of several family members household projects. Because of his warm heart and generous spirit he was a man to be counted on for not only help, but time shared over a cup of co?ee and a donut (of course plain). Many of which were at his very own kitchen table, as his door was always open.

His love of family and friends was often celebrated around the pool on Summer weekends and the living room and extended table during the Christmas Season as he was the Happy Host.

Arthur is predeceased by his mother, Cora Chaput, sisters Hazel and Lillian Koch.

Calling hours will be held on Friday, August 19, from 5 p.m. until 7 p.m. in the MERCADANTE FUNERAL HOME & CHAPEL, 370 Plantation St., Worcester. A Funeral Mass will be celebrated Saturday, August 20 at 10 a.m. in

In lieu of flowers, donations in his memory may be made to Catholic TV Boston, by visiting www.catholictv.org and then selecting the “donate” button.

There is an online register for messages and condolences, it can be found at www.mercadantefuneral.com