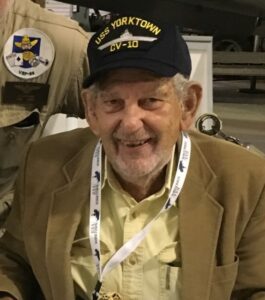 Gerald Craft Hennesy passed away on March 31st. He died peacefully at his home in Clifton, VA, with his family by his side. He was 100 years old.

Gerald was born in Washington, DC, June 11, 1921 and grew up just over the line in the Mt. Rainier/Brentwood area of Maryland. At 19, he studied for a year on a scholarship at the Corcoran Gallery School of Art. He was employed as a newspaper artist at the old Washington Times-Herald, and when his father became ill, he took over his work drafting patents for a patent attorney at $3 a job. He supplemented this work playing the piano in a band for $3 a gig ($6 if they played on New Year’s Eve).

The day after Japan attacked Pearl Harbor on December 7, 1941, he quit his job to join the Navy, volunteering as a naval aviator. As a F4U Corsair fighter-bomber pilot in the Pacific, he flew almost 100 missions off the aircraft carrier Yorktown CV-10. He received the Air Medal for downing an enemy aircraft during a rescue mission for one of his fellow pilots.

During the Korean War, Hennesy flew on active duty for two years in the Mediterranean. He remained with the Naval Reserves and retired as a Commander. After the war he worked for the U.S. Department of Energy (then known as the Atomic Energy Commission), as Director of Manpower and Management, but spent most evenings pursuing his true passion, painting.

In 1972 he and his late wife, Elizabeth, built a home and studio in Clifton, where he worked and became a well-known and respected artist. His paintings have been exhibited at the Baltimore Museum of Art, Georgia Museum of Art, the Corcoran and the Smithsonian, and are displayed in numerous public and private collections, including The House of Representatives and the State Department.

Gerald is predeceased by his wife, and four of his children, Michael, Kathleen, Paul, and Brian, and is survived by three sons, Shawn (wife Theresa), Hugh, and Craig (wife Emma); four grandchildren, Thomas, Elizabeth, Michael, and Timothy; and two great grandchildren, Felix and Oliver.

Gerald will be interred in Arlington National Cemetery on August 16, 2022. There will be a service at 11:00 am in the Old Post Chapel at Ft. Myers, followed by a military funeral procession to the gravesite.

In lieu of flowers, well-wishers can contribute to the USS Yorktown CV-10 Association.