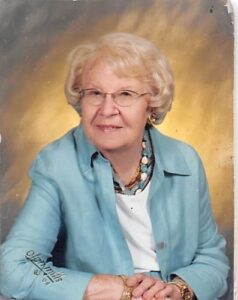 World War II veteran Carol Stuart, 99, of Zanesville, died at 8:02 A.M. on Wednesday, June 29, 2022 at Primrose, Zanesville. She was born August 28, 1922 in Milan, Wisconsin, a daughter of the late Paul Carl and Doris Wellman Filter. She was a faithful member of Grace United Methodist Church since 1956. After graduating high school in 1940, she went on to graduate from the Mercy Hospital School of Nursing. She is a United States Navy Veteran, serving her country as a registered nurse and in Zanesville, for many years was employed as an RN at Bethesda Hospital. Carol loved her sports, especially football with her Wisconsin Badgers, and The Ohio State Buckeyes. She enjoyed golfing, swimming, knitting, playing bridge and was an amazing cook. Throughout their years Carol and Knowlton had the privilege of traveling the country and Europe, as well as cruising, but their favorite destination was always Charleston, South Carolina, home of the USS Yorktown Aircraft Carrier. They enjoyed many years at their home and with special neighbors in Highland Village.
She is survived by a son, Terry(Karen) Stuart; a daughter, Debbie Queen; her joy, delight and love of her life seven grandchildren, Stacey (Paul) Bernardo, Bradley Stuart, Kevin Queen, Alison Smith, Kris (Tonya) Queen, Kathryn Queen and Bo (Kate) Queen; thirteen great grandchildren, Lucas Bernardo, Jacob Bernardo, Vincenzo Bernardo, Emma Stuart, Alex Stuart, Andrew Smith, Maggie Smith, Patrick Queen, Peyton Queen, Josh Queen, Joe Queen, Kasey Queen and Addy Mae Queen; and a great-great granddaughter, Layla Bernardo.
In addition to her parents, Carol is preceded in death by her beloved husband, Ray Knowlton Stuart whom died April 1, 2007; four sisters, Grace Pierson, Katherine McDonnell, Vinida Reinardy and Vera Drager.
Private graveside services will be held, Carol will be laid to rest beside her beloved husband, Knowlton at Zanesville Memorial Park Cemetery. A Celebration of Life will be held at a later date next spring with military honors to be accorded to her by the United States Navy in conjunction with the VFW George Selsam Post 1058. Carol and her husband Knowlton were both apart of the “greatest generation” as they served their county in World War II.
A special thank you to the nursing staff at Primrose for taking such great care of Carol.
In lieu of flowers, memorial contributions can be made to Grace United Methodist Church, 516 Shinnick St, Zanesville, OH 43701, or to the American Cancer Society-Breast Cancer at https://donate3.cancer,org or the Alzheimer’s Association at https://act.alz.org
To send a note of condolence: visit www.bolin-dierkesfuneralhome.com, follow us on Facebook, or call our professional staff at (740)452-4551.