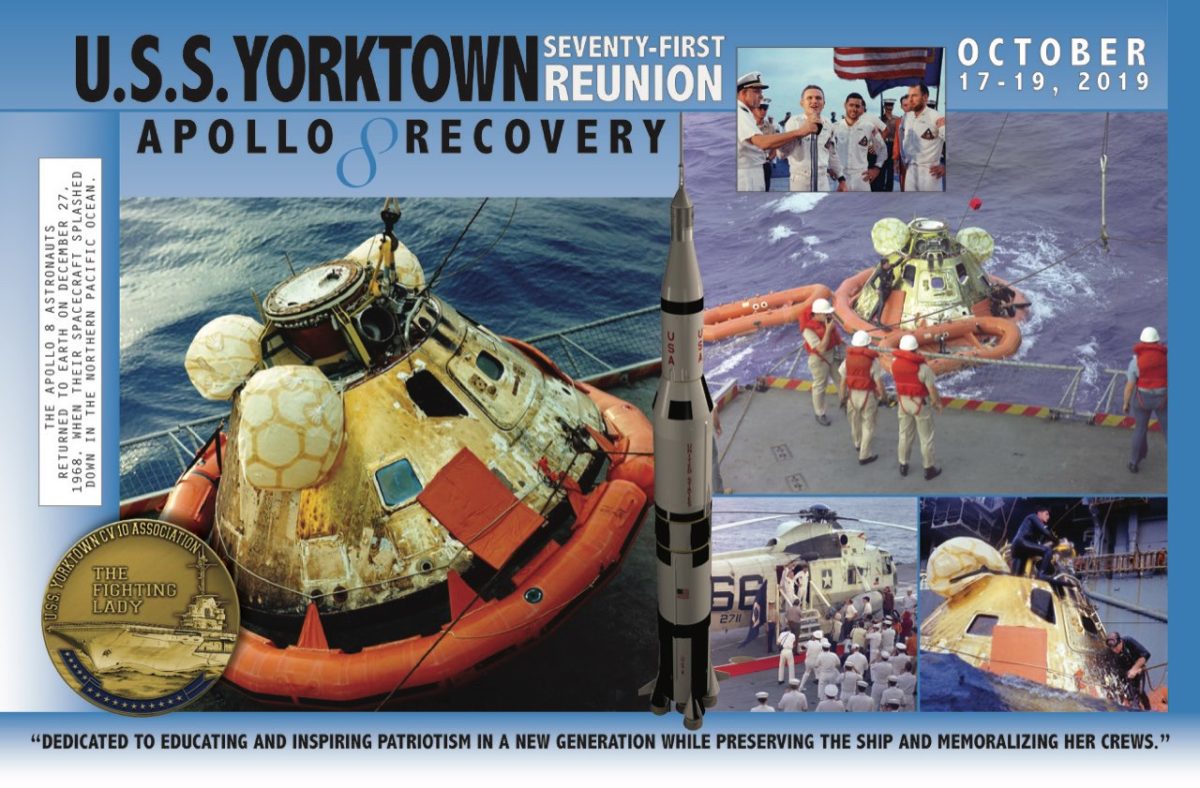 After several months of preparation and planning, the 2019 USS Yorktown Crew Reunion is over after just a few days. The Yorktown Association hosted over 300 guests for a three-day event with about 120 of those guests being Yorktown veterans. 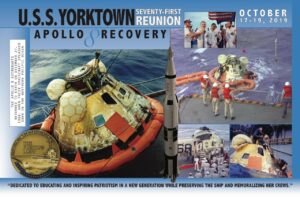 The 71st Yorktown Reunion centered around the theme of the Apollo 8 splashdown that the Fighting Lady assisted with during recovery.

The event kicked off on Thursday with a symposium of “Yorktown Stories” told by Yorktown Association board member Chris Cooke, Ed Sarkisian, and Barbara Flanagan. The event was emceed by former Association Board Chairman Ron Meacham.

The first Yorktown Dinner on Thursday hosted more than 300 crew members and their loved ones. They joined together to enjoy a time of fellowship and hear journalist Mark Bloom’s account of the Apollo 8 story. Bloom was a lifelong journalist, writing for Reuters and the New York Daily during Apollo missions 8, 11, and 13 along with the Gemini missions as well. He recalled the surprise earthrise, the astronauts “magical” reading of the first ten verses of Genesis on Christmas Day 1968, and how special it was to hear the Yorktown crew’s excitement of meeting the astronauts when they came aboard the ship after splashdown. 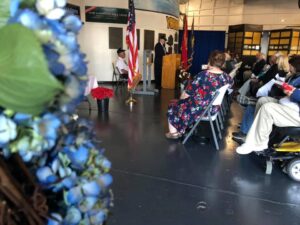 Moving into Friday, the more than 200 people attended the Yorktown Memorial Service remembering those crew members who have lost their lives. Yorktown Association Board Chairman Dean Peterson led the service, introducing speakers such as former Yorktown Chaplain Dean Veltman, and those who were performing or speaking during the ceremony.

Two families spread their loved one’s ashes off the ship and into the Charleston Harbor as a last goodbye. Those families also threw a memorial wreath into the water in honor of them. Two other wreaths were thrown by Peterson and Meacham to remember the Yorktowners who passed in previous years. 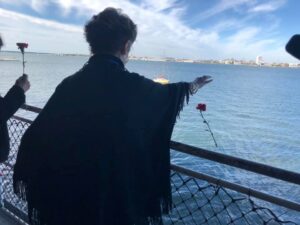 Red and white carnations were given out at the end of the ceremony for those who attended to memorialize their previously lost loved ones who served as well.

After the memorial service, the annual silent and live auction were held during lunch on board the Yorktown. Items such as model ships and planes, various books, and much more were up for grabs. 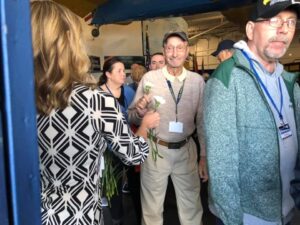 Saturday brought rain to the Lowcountry but it didn’t stop hundreds of people from showing up to the “Crew Meet and Greet” event. Over 40 Yorktown crew members took their seats on the ship and signed their names and told their stories for almost four hours. This is the biggest turnout the meet and greet has ever had! There was something truly special in the air as kids and adults both got to hear about the antics those crew members got into while serving. 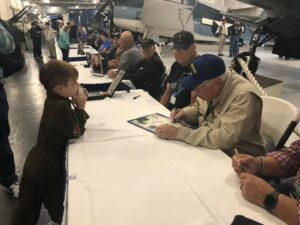 To keep everyone entertained while they were on board, the Yorktown Association partnered with the NASA SC Space Grant Group from the College of Charleston to hold an afternoon event based around the Apollo 8 splashdown. 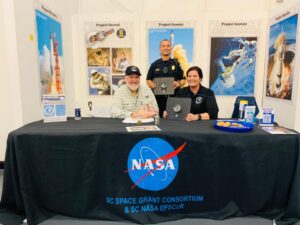 Six different activity stations ranging from space-based crafts, a table of rocks from the moon and Mars, Yorktown veterans who were on board when the capsule was retrieved, and a “what do you weigh on the planets” were the talk of the ship.

Thank you to our Space Grant partners, we couldn’t have done that event without you! It was amazing to see how excited everyone was to put the Apollo 8 components into real terms.

The 71st Yorktown Reunion wrapped up with a Farewell Dinner Saturday evening where the nostalgia between the crew members could truly be felt the whole night. Awards were presented by former Yorktown Association Board Chairman Ron Meacham to several dedicated veterans or their remaining family members. He also presented a Lifetime Achievement award to our Senior Museum Curator David Clark for his 40 years of service and dedication.

John Wukovits, well-known author and popular historian, was the key speaker for the night. He presented his knowledge on WWII, reminding everyone just how important these men who fought for our country on board the Yorktown are. 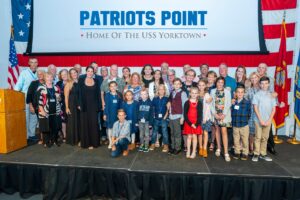 A special presentation in memory of Joe Sharkey was also given since about 30 of his children, grandchildren, and great-grandchildren were attending.

The evening finished with hundreds of pictures taken and stories told.

Many of the veterans say they look forward to this event every year and can’t wait to see what’s in store for the 72nd Yorktown Reunion in October 2020.