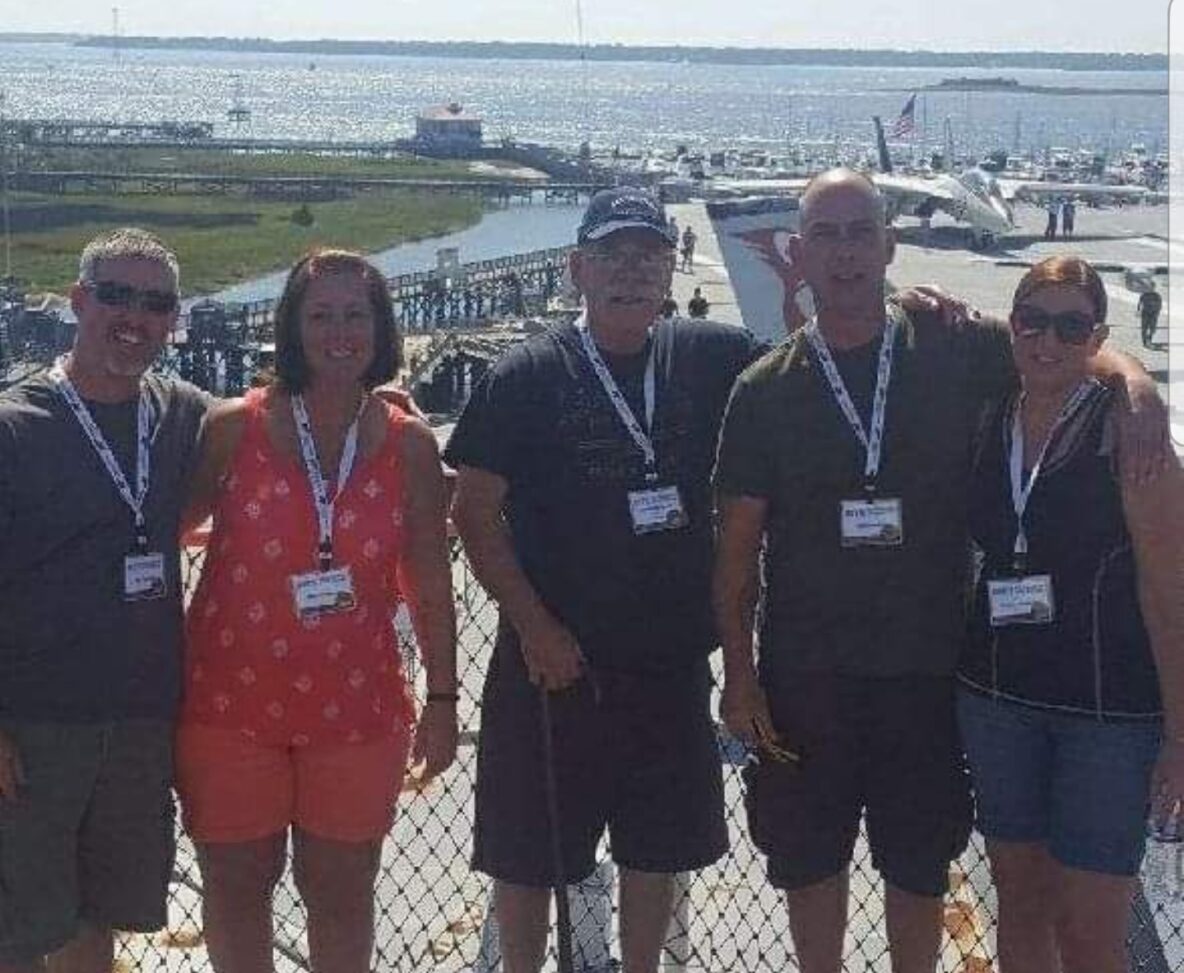 Many of our members are the legacy of a sailor that served aboard the USS Yorktown. Their children join in patriotism, but more importantly, in honor of their father, grandfather, whatever the case may be.

Recently, we have had the privilege of welcoming another generation of USS Yorktown CV-10 Association members. Through our new Facebook Group, we were able to connect with Dawn Henderson. Her father served on the ship in 1963-1966. Dawn was so invested and excited for the opportunity to honor her fathers service.

The following are a few words from Dawn herself about growing up, her father’s service, and what made her join the membership for herself and even for her two brothers! We are so thankful that you have joined our association Dawn!

Growing up, I don’t remember my Dad talking too much about his Navy days, let alone being on a ship and his experience in the Vietnam War. It was not until my adult years that I start hearing & really listening to those stories and being interested in my Dad’s experiences. My deep interest in the Yorktown and my Dad’s time on the ship started in 2003, when my brother’s, Scott & Derek, along with my Dad, took the trip from Tonawanda, NY (suburb of Buffalo) to Charleston, SC to tour the Yorktown. I remember them being so excited to be there and sharing their adventures about the trip and what they learned. It was all very exciting!

In 2017, I was able to make that trip down there with my Dad, my brother Scott, his wife, Yvonne, and my boyfriend Bill. We traveled there for the reunion, met some great people (Todd Cummins, Buzz Purcell, and Hal Rigby), and had the time of our lives! But the BEST part: seeing my Dad’s face light up as he told his stories about the days he spent on the ship, his buddies, the things they did, and of course, his time in Vietnam while on that ship. My Dad worked as an Arresting Gear Operator, operating Engine #1. He was also a Deckedge Operator, as well as working in the port catapult. Just to hear my Dad’s stories are incredible, and the things & days that he experienced were nothing short of amazing! HE truly is my hero!

When I saw on Facebook that the Association was starting an exclusive, members-only page, the “lightbulb” came on – Why WOULDN’T I want to become a Member? Only positive things can come from it. I would have access to the FB page that can give me so much information to help me learn more, free access to the ship the next time we visit, invitations to the reunions, making new friends & connections, and much, much more. I have to do this! Then I thought that since my brothers are just as interested in this, I could surprise them with their memberships! I got the ball rolling, and now here we are, alongside our Dad, proud members of the Association.

I hope to learn as much as possible while being a member, along with continuing to listen to my Dad’s stories. As hard as it was sometimes for him to be on the ship, especially during wartime, I know he is proud to have served his country, and I’m proud of him just the same. Now he can be proud of his children for following his Legacy and learning from him and his experiences.

In the words of my brother, Derek – “Dad served on the Yorktown during Operation Rolling Thunder”, which makes him even more proud. And from my brother, Scott – “Knowing Dad served on the ship makes me very proud”. And all of us can agree that having a membership gives us the opportunity to learn more.

Our Mom, Beverly, my Dad’s love of his life for 50+ years, passed away in 2018. I know she was  proud of my Dad too. She made the trek to South Carolina with my Dad many years ago to tour the ship, and I know she is smiling down on us now, proud of us kids too for becoming members of the USS Yorktown CV-10 Association Inc.

In closing, the wise words of our Dad reflects on a specific weekend that he spent on the ship:

“I believe we are all, ships company and detachments, very fortunate to have the Yorktown as a museum honoring her service. I have one very special memory of my service aboard. I don’t recall the year, but it was the weekend of the Dependents Day Cruise. I was lucky enough to have my fiancé at the time (later to be my wife) visiting me that weekend. I was able to have her with me to experience shipboard life for a short time. Some years later, Bev & I traveled to South Carolina to visit the ship, which was a great experience. Then on two more occasions, was able to visit with my children – 2003 with my boys, Scott & Derek, and then in 2017, for the reunion, with Dawn & Scott, and their significant others, Bill and Yvonne. We all had a great time!  The Yorktown was and still is a great ship and I was proud to serve.”