At the October 2015 Reunion of the Association, I enjoyed a long visit with Donald R. Heck and this is his story. Donald served aboard Yorktown as an AMS3 with a detachment from HU-1 as the ship worked up and deployed for the 1964-1965 WestPac. HU-1 was a utility helicopter squadron that provided small detachments to carriers of the Pacific fleet. 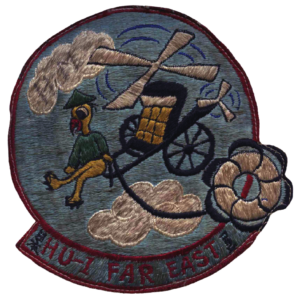 Don went aboard with his detachment, which consisted of three helos and some thirty officers and enlisted personnel, in June 1964. Aboard Yorktown, the HU-1 helos flew search and rescue, plane guard, and utility missions. Page 274 of the 64-65 Yorktown cruise book contains a full page shot of HU-1 helo number 40 on a utility run with a torpedo being transported on a sling.

On Essex class carriers space was always at a premium and creature comforts very sparse. The HU-1 detachment enlisted men, except for the unit chief petty officer, were quartered in an alcove off a passageway that was on the route of mess cooks hauling out the refuge from the mess deck. Don noted that more than once the mess cooks carelessly slopped food waste from the large and heavily loaded trashcans onto lower racks in the makeshift berthing area as they made their way to disposal.

Like most pre-deployment plans, the 64-65 WestPac was viewed by all concerned as a grand tour. However, the Vietnam War was cranking up and the best laid plans were shaken up. An extended sea period off of Vietnam revised the cruise plan and eliminated a visit to Australia.

After the 1964 Christmas Holiday in Sasebo, Japan the HU-1 Detachment was split up with a portion going to the USS Hancock, and the rest to the USS Ranger. Don went to the Ranger.

It was early in the deployment to Ranger that Don’s dunking occurred. The centerfold spread of the February 1965 issue of The Shield, newsletter of the USS Ranger (CVA-61), includes a story, Rangermen Save Downed Helicopter in South China Sea, that covers the recovery.

Helo 30, Don’s bird, had just delivered a passenger to the destroyer USS George K. MacKenzie when a drive cable to an oil cooler in the air intake plenum failed and the engine shut down. The Shield reports that, “Within minutes another Ranger helo had plucked the uninjured crewmembers out of the water.” However, when you are in water over your head and loaded down with gear, “minutes” is a long time.

In relating his story, Don may have been loosened up by the juices of the hospitality room at the Reunion because he fessed up. He had not checked out the CO2 charges on his Mae West prior to the flight as required. So there he was in the water very busy airing up his life jacket by blowing into the flexible tube.

To make matters worse, half of the flotation gear on the helicopter failed, allowing the bird to turn upside down in the water.

Don and his mates were picked up by squadron mate helo 17 and set down on the Ranger flight deck. Eventually, the downed chopper, following much rigging work by EOD divers from the Ranger, was also hauled aboard. She never flew again.

During the recovery of the helicopter, Marine riflemen fired into the water to keep the sharks away as the EOD divers worked to connect rigging for the lift.

When comparing shipboard life on the Yorktown to that on the Ranger, Don said that the deal breaker was the fact that Ranger had air conditioned berthing spaces. 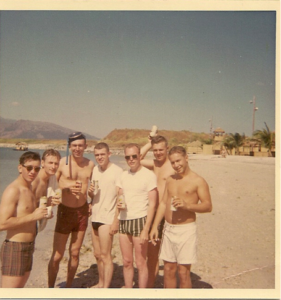 Don’s cruise on Ranger came to an end after a fuel line broke, ignited and engulfed the ship’s No. 1 main machinery room in flames. There was one fatality and it took a little over an hour to extinguish the flames. After a stop in Subic Bay, Ranger headed for the shipyard in San Francisco for an overhaul.