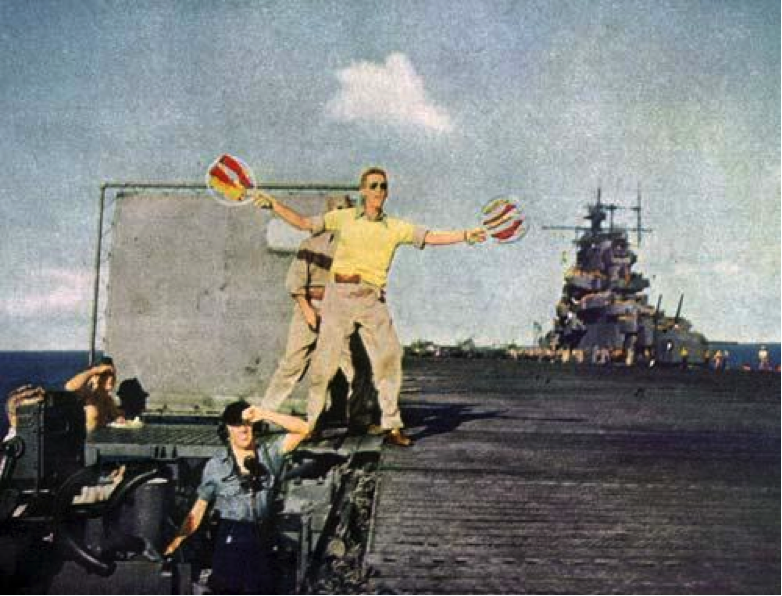 The following is from “ALL HANDS” of January 1967 and is reprinted with permission from that magazine.

Antisubmarine Squadron 22 claims for herself (and other units of her air group) the distinction of being the last group of Navy fliers to make paddle landings – a skill which became archaic when USS Lake Champlain (CVS 39), the last of the straight-deck carriers, was decommissioned.

The paddle method of landing has played an important role in aviation history, and the squadron’s pride in the skill it required is indeed justified. Paddle landings under the guidance of the Landing Signal Officer – patron saint of all naval aviators – were characteristic of straight-deck carriers. Aircraft landing aboard them touched down on the aftermost part of the flight deck and headed straight down the ship’s centerline.

During landing operations, other aircraft were parked on the forward end of the flight deck. The two areas were separated by barriers of large steel cables, hopefully strong enough to catch any aircraft not stopped by the arresting wires. Should a plane hit the barrier, it sometimes meant minor damage to the plane, but this was, at least, the lesser of the two evils.

Since the deck space forward of the landing area was occupied with parked aircraft, pilots wre committed to a full-stop landing earlier in the approach. There was no opportunity for a touch-and-go. No margin for error of any kind. Precision flying, honed by constant practice, was essential.

The landing signal officer with his paddles signaled an incoming aircraft whether it was too high, too low, or just right. Some LSOs would judge within a knot or so the speed of the approaching plane.

To present-day viewers of World War II movies, the LSO with his paddles held in outstretched hands, appears to be merely picturesque. Quaint. To present-day aviators, it seems almost incredible that all our carrier-based aircraft were recovered in this manner during World War II.

Now, of course, newer angled-deck carriers use mechanical/ optical systems to give their pilots needed assistance. The LSO is still there to mentor the approach, but rarely uses paddles to give signals.

Although carrier flying still requires an immense amount of skill and still has its thrills, modern techniques have largely eliminated the type of cliff-hanging carrier landings favored by scenario writers but which were by no means fictitious.