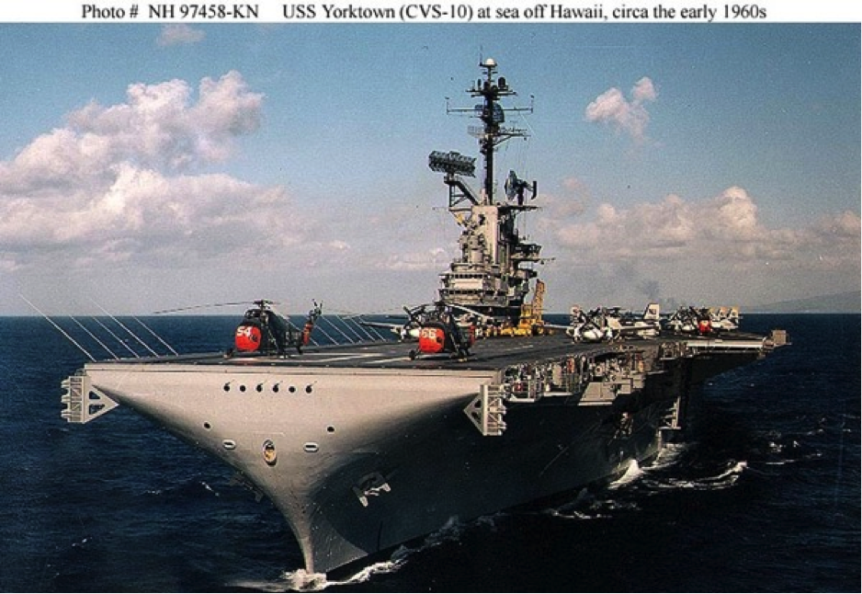 Soon after boarding ship in late afternoon I heard the message over the PA system to “Set the Special Sea Detail”. I realized this meant we were about to leave port and 2/3 of the crew was ashore on liberty. I was the Chief Aerographer’s Mate in the OA Division (The Weather Office on the 07 level) and realized I had better get up to my office knowing that my Division Officer and Ship’s Meteorologist, LCDR John Nourie, was also absent from the ship on liberty.

Soon after my arrival in the office (B-0709L) the captain’s Marine orderly rushed into the office barking that the Captain wanted Mr. Nourie on the bridge post-haste. I informed him that Mr Nourie was not aboard, but somewhere on liberty. His quick response was, “Well Chief, you better get your **s down to the bridge because the Captain wants someone, and real fast.”

I scooted down immediately and informed the Captain that Mr. Nourie was ashore and that I was the senior enlisted man in the Office . His response/ query was: “We need to get up off the north coast of England. What’s the fastest and safest way to get there?” Off the record he told me that Russia had just launched a new class of nuclear sub and we were supposed to intercept it to see if it was detectable. All this info was very classified at the time. I asked him to allow me to analyze some weather information and let him know asap. I proceeded to my office, had the junior POs on watch draw up a surface chart, scanned the current upper air fax charts and analyzed the teletype info we were constantly receiving from FWC (Fleet Weather Central) Norfolk.

My conclusion from analyzing the charts and teletype info was that as we had proceeded eastbound on the Atlantic I had seen small waves develop on weather fronts to the north of our route and develop into major storms every 48 to 72 hours. It appeared to me that one was developing and the forerunning seas would have a long swell from the west (270 degrees) and we would be heading NW to N (320 to 360 degrees). This meant we would be taking rising sea swell right abeam of probably 15 to 20 ft in height. This would not be good. My advice was to proceed safely up the Irish Sea (in the lee) between Ireland and England for safety reasons. The Captain’s immediate response was a gruff, “What does Norfolk say about this?” I immediately responded, “Nothing, Sir, they make no mention of the waves (weather) forming.” He summarily dismissed the issue and turned to the Officer of the Deck with some orders which I can’t remember. He did tell me that he wanted a report brought back to him on the bridge every hour on the hour. It was now about 1700 to 1800.

NOTE: This is where my story doesn’t make sense to me after all these years. If a submarine was coming out of a sub base in northern Russia and we were in Netherlands, it would make more sense for Yorktown to head NE into the North Sea which is nearer Russia than to head WNW into the Atlantic to intercept it. But, that is what we did. The ship headed NW into the open Atlantic west of Ireland.

As the evening progressed the seas became rougher and rougher. I kept giving the Captain my hourly reports and updates on my forecast at his bridge station. I was the CPO Mess Caterer so I called one of my cooks in the Mess and had him get one of the Messmen to bring me up a sandwich and something in the evening but around 0100 or so (which was now October 3), I decided I had to get a cup of coffee in the Chief’s Mess which was on the starboard side amidships on deck 2. I remember getting a cup of coffee and laying my head down on the arm of one of the couches we had when IT HAPPENED!

We took that roll told about in the article. I immediately heard the General Quarters alarm go off and the bosun pipe “All hands, man your battle stations!” I was up the starboard ladders from the 2nd deck to the 07 level in the superstructure in probably 20 to 30 seconds. All hell seemed to have broken loose.

It was my understanding that the Admiral’s Barge and the Captain’s Gig had both broken loose and were just rolling around the hangar deck, smashing into several aircraft. I believe we altered course drastically and tacked all the way north to the Shetland Islands. We had a very unhappy Captain at this point.

As I remember, we steamed under radio silence in the lee of the Shetlands for over 3 days using the COD aircraft to ferry crewmembers back to the ship from either Rotterdam or someplace in Scotland. I do know that LCDR John Nourie, the ship’s Meteorologist, was on one of the first planes to arrive onboard.