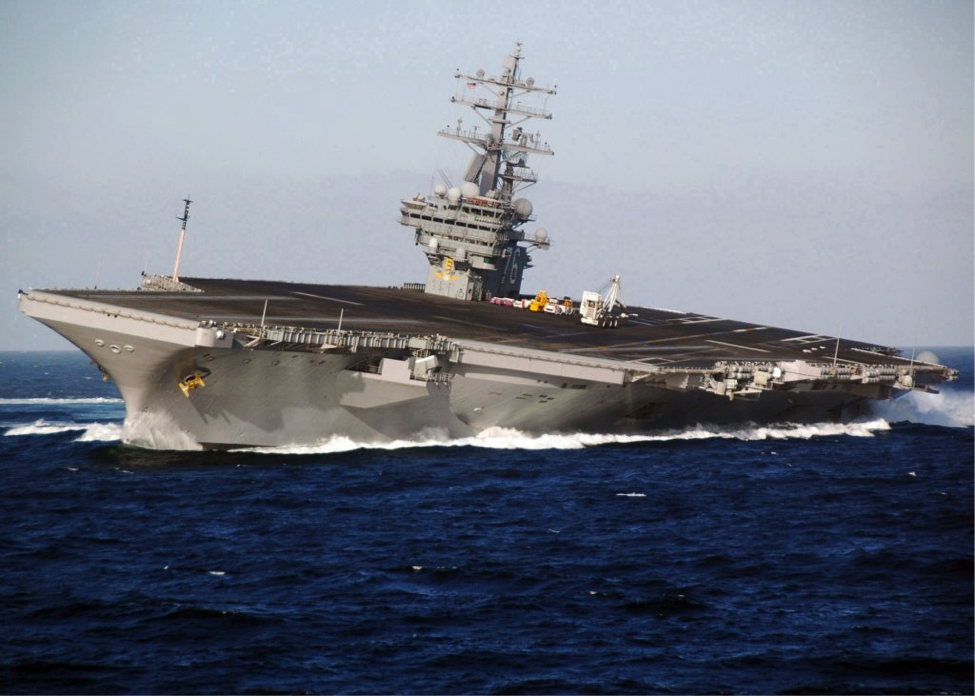 This piece is a composition based on information received from Dan Bernath, Steven Butler, Neil O’Connor, Dave Garrison, and the Department of the Navy, Naval Safety Center, Norfolk, VA. Wandering through the Hospitality Room and mingling with attendees at the various functions during an annual Reunion of the Yorktown Association is a terrific way to learn unique and little-known facts about the ship. For instance, at a recent Reunion, I happened to overhear a couple of the fellows talking about their mid-60s WestPac when the ship was handling Agent Orange for application by helicopter. Another overheard discussion involved an incident during 1969 while the ship was at sea in the North Atlantic on her last cruise.

It never ceases to amaze how a crisis or event of some order can befall one division or part of the ship and it not become common knowledge. More amazing is for an event with a fairly broad impact to not be widely known or talked about.

In response to a note in the winter 2014 edition of the Sea-V-Ten regarding the above observations, several shipmates responded with information on the report of “The Roll” experienced on 3 October 1969. 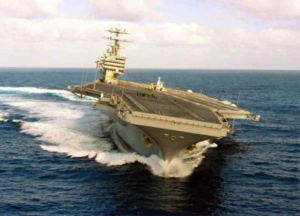 Of the respondents, one did not have a detailed recollection, one was detached before the incident, one came aboard after the event, but two claim to have been awake, at their duty station, and in possession of total recall. Theirs is the war story told here.

The following detailed recollection comes from Dave Garrison. “I served on board the Fighting Lady during that cruise (ed. 1969) and can personally attest that she took ‘at least’ a 22-degree roll. At the time the word on board was that it was a 26-degree roll. Whichever is accurate, I can vouch that at the time many aboard were unsure she was going to come out of it. She sure seemed to lay over for an awfully long time.

“We were chasing a Soviet sub and the seas were mighty large for several days. About 2100 one evening we lost a SH-3 Sea King helo when its main rotor impacted the ocean as it veered from the deck to launch while we were in a huge roll. Only the pilot, who was in the co-pilot seat, was recovered. Three airmen were lost at sea. Who says there are no casualties in a Cold War? It was a very sad time aboard Yorktown.

“I believe it was the next morning that general quarters was sounded at about 0300. Needless to say we were all at our GQ stations in record time. It turned out the skid for one of our liberty launches (remember how large those were) had broken its moorings and was creating havoc in the hangar bay. A couple of helos were damaged and fuel was all over the deck. I was the 1-JV circuit talker in Damage Control Central. Clean-up took a lot of time seeing that we were still taking heavy rolls. We secured from GQ about 0530 and returned to our racks just in time for reveille at 0600.”

Dale Potts’ communiqué says that, “I do not recall a heavy roll on our LANT cruise but it could have happened.” Later Dale mentioned, “…that a boat as I recall, the Captain’s boat…broke loose in the hangar bay and damaged a couple of helicopters. Had to be caused by gravity created by a roll of some kind.”

In a copy of an email on this subject to Dale Potts from Dan Bernath, Dan wrote to Dale, “You are such a sleepy head you SLEPT THROUGH THIS TOO at 0300 or so! We almost capsized in the North Atlantic. Geeze!” Dan goes on to say that, “I was a master at arms at the time and chasing sailors out of the hangar deck after 2 helos were crushed by the Captain’s launch that broke loose from its moorings.”

The straight dope on this event comes from the Department of the Navy, Naval Safety Center, Norfolk, VA who provided me with a copy of the Reportable Event report. The event narrative reads as follows: Heavy weather/ material failure. Cost $923,326. No injuries. During heavy weather two padeyes used to secure gig dolly parted at weld and several chains parted. Gig and Dolly rolled loose on hangar deck striking 2 aircraft, a 40 foot personnel boat, and a fork lift. Two other aircraft were damaged by a sono buoy which was knocked loose from overhead. Minor damage occurred to hangar deck roller curtain door. In other areas of the ship 3 safes broke loose due to heavy rolls causing damage to office equipment. More tie down chains on dolly than required by design, and weak padeyes giving away caused other tie downs to break.” “…Ship had been in heavy weather 2 hours prior to accident and watch alerted and reported all secure just prior to padeye parting.”

The event report does not point any fingers, but according to a notation on page 265 of the 1969 cruise book, “…At sea, Fourth Division maintains the ship’s boats and life rafts.” Can’t help but wonder what this incident did to quarterly marks of those in charge.

I would like to compliment the Navy Safety Center, Norfolk, VA for the timely response to my request for information concerning “The Roll” of the Yorktown in 1969. It was only a matter of days between my initial request and the time that the information was in the mail. In the meantime, I was provided with a FOIA form and given direction on completing the request.

This high level of service is indicative of a very professional 4.0 operation. To the Naval Safety Center, Well Done!