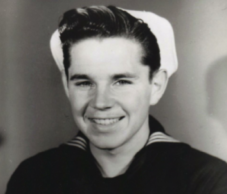 When Yorktown pulled into Bremerton, Washington in Sep 1944 I was looking forward to my first leave in twenty months. I was happy to see USS Dale as one of the three destroyers that escorted us in from the fleet because one of my back home buddies, Lutchie Wieland ,was a crew member. I was even happier to learn his leave would start the same day as mine and we would be going home together. My mother had recently been transferred to Washington D.C. which meant I would have to go there as well as New Orleans where I had enlisted. The way things worked out I would have to go to New Orleans first.

Lutchie and I boarded the train to New Orleans together. The train ride would be an ordeal. The car we were in was an old one which meant we would have to sit up. I tried crawling up into the luggage rack to stretch out but I couldn’t fit. It was a tough ride. Most of the men in our car were Yorktown sailors or other servicemen; they were drinking, boisterous, raising hell and in the process one of the windows was broken. The conductor came around and said that if we didn’t straighten up he was going to take our car off the train and leave it on a siding somewhere. Of course our reply was this train “ain’t going nowhere without us.” There were MPs on the train checking leave papers which had to be shown every time they changed shifts. One of them told me all he did was ride the trains looking for AWOLs etc. He said both he and his partner were cops in civilian life. He told me he was cutting us a lot of slack because we were coming out of the war zone. This fact was indicated on our leave papers.

After being told the train would be delayed in Minneapolis a half hour, Lutchie and I got off leaving our dress blues, leave papers and other personal items in a travel bag under the seat. In our undress blues, we went to a little tavern nearby and upon return were told by an MP the train would be there at least another half hour. We went back to the tavern but unfortunately the MP was wrong and the train was pulling out when we returned. Someone told us if we got a cab we might be able to catch it in St. Paul. Though we went screeching through the streets and over the bridge we were too late, the train was gone.

We were in St. Paul about 10 PM, in our undress blues and no leave papers. Fortunately we had our wallets. A kind lady ticket agent advised us there was a fast train, a streamliner called the Hiawatha, leaving at 7AM the next morning and would get in Chicago just a couple of hours behind the train we had missed. She would take care of the tickets etc., and it wouldn’t cost us any more money. We went out into St. Paul where there was a lot of activity even though it was late at night by this time. We met some kindhearted souls who put us up for the night and brought us to the station the next morning.

The Hiawatha was luxurious compared to the train we missed. We had reclining seats and no loudmouthed GIs aboard.

Because I was able to remember the car number (1102) of the train we missed, the Chicago station master gave us a ride out to the yards where we spotted it and found our bags right where we left them.

We had a long layover before boarding another train for New Orleans due to arrive there in about 23 hours. Once on that train Lutchie and I decided to try getting separate seats, hoping to have more room to stretch out and get some sleep; except for the ride on Hiawatha we had very little since leaving Seattle three days ago. We were able to do this and did get a good bit of rest before arriving in New Orleans the next day.

It was the muggy air and smell of honeysuckle after b e i n g g o n e a l m o s t t w o years that made me realize I was back home in New Orleans.

Lutchie and I had agreed to meet later that evening at the old gang hangout on Danneel Street where we had congregated most of the time. Just about all the old friends were there except Freddie Cunningham who was on his way to the Aleutians, and Paul Rowan, who had joined the Navy with Lutchie and was serving aboard the destroyer USS Abner Reed when he was KIA.

I stayed in New Orleans for three or four days and I remember Franny, now all of sixteen, gave me a pint of whiskey to take on the trip to Washington.

Lutchie had a 30-day leave which meant I would be alone, except for the Chicago/Seattle leg of the journey. The Southerner was a reserved-seat train very similar to the Hiawatha. My seat mate was a naval officer, a full lieutenant about thirty who was downright friendly. I think for awhile we both forgot about the gulf that existed between enlisted men and officers. We went together to the club car, met two young ladies and partied with them for nearly the whole trip to DC. Fortunately, I had the pint to keep the party going when the train passed through “dry” areas and couldn’t sell alcoholic drinks.

Three or four days after arriving in DC I departed for Chicago with a quart of whiskey donated by family and friends. After a train ride, another long layover in Chicago and meeting a Yorktown sailor named Robert Schmuck in the station, I finally boarded a train to Seattle. I hadn’t known Schmuck before but he and I shared the second to last seat in a car in front of two girls who were sisters also going to Seattle. We were able to fold down the back of our seat creating a bunk where one or two of the four of us could stretch out. During the two or three day ride we consumed that quart of whiskey and later one of two quarts the girls were bringing back to their father. Of course we shared the whiskey with a few other service people in the car looking for a drink.

Of my twenty-day leave, the only one I ever got in over three years of service, I spent eleven of them on trains. However, we did manage to party and enjoy the time spent on the trains, so much in fact I would have been willing to do another month off Okinawa to relive some of those days.

I didn’t see Lutchie again in Seattle but did see him later at sea in the Pacific when Dale delivered fleet mail to us. All we could do was wave but it was like a brief touch of home.