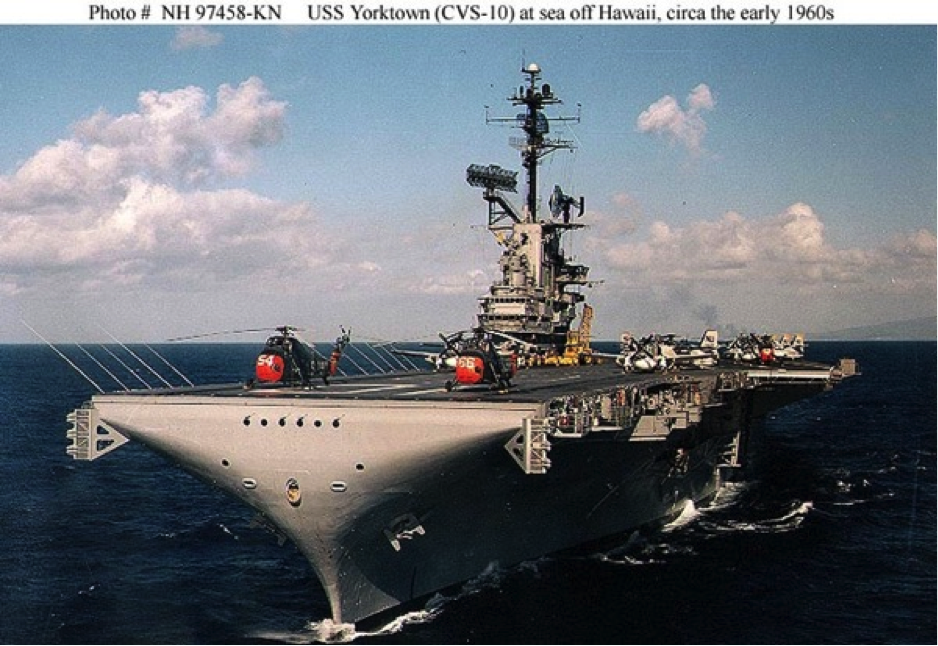 Among the many exotic ports most American Sailors visit when doing a WESTPAC – Western Pacific – deployment is Hong Kong. Sailors usually also enjoy memorable port visits to Singapore, Japan and the Philippines and sometimes on the way home, Australia. But the one thing most remembered about the WESTPAC port visits was a lady in Hong Kong named Mary Soo who ran a thriving business with younger women. There are no official records available but it is believed that she, already at an old age, opened shop with her girls prior to World War II and continued until her death in the late 1970’s.

I did not have personal contact with Mary Soo but soon learned about her after my ship, the aircraft carrier USS Yorktown, arrived in Hong Kong in 1968. Her work force of young women cleaned and painted our ship from the water line to the flight deck, in exchange for taking our ship’s garbage. After each meal – our ship daily fed three meals a day to several thousand sailors and officers, Chinese workers wearing ragged clothes and coolie hats would line up along the passageways from the mess halls and officer wardroom to the rear of our ship, called the fantail. They passed what seemed an endless line of buckets filled with unconsumed food to the back of the ship and depending on contents, dropped into compartments on the sampans. I vividly remember seeing an arm grab out a chicken wing, put it in her mouth to quickly eat the meat, and then stash the bone somewhere while continuing to pass the b u c k e t s down the b u c k e t b r i g a d e . (Regulations require all Navy ships to dispose of all food prepared but not eaten at meals. This is to prevent food poisoning or other p r o b l e m s that could disable or e n d a n g e r the ship at s e a . ) T h e women also emptied all the garbage f r o m t h e ship, things like bent nails, broken wooden crates and scrap metal. They sold it all in Hong Kong. Crewmembers remarked that some of the meals they ate ashore may have come from food they could have gotten for free aboard ship, but with added herbs and spices, tasted much better ashore.

I did notice the workers had slight builds but was never close enough to determine they were female until told by a WESTPAC veteran friend. The next several days, between food and garbage dumps, these same Chinese young women would clean the outside of the ship with long poles with rags tied on the ends, from their sampans. Then they painted our ship Navy grey from the water line to the flight deck. They scrapped off old paint and rust spots, often from precarious positions our safety officer would never allow sailors. They also refreshed our number, “10” under the bow. We supplied the paint, primer and rags. In other ports, the Navy usually had crewmen do the chipping and painting and paid to have garbage removed. But our garbage was a valuable resource in Hong Kong. Also navy regulations prohibited paying foreign nationals in cash for work accomplished on the ship so this exchange met the needs of both the Navy and Mary Soo.

Mary Soo was a remarkable businesswoman and humanitarian. Female babies were a liability in China.Mary Soo saved the lives of many “unwanted” girl babies by buying them from their families and raising them in orphanages as part of her family. As they grew, she put them into her business, banking their meager earni n g s f r o m h e r enterprises so they had the options, if they didn’t continue with Mary Soo, to later start their own business or use for dowry to get married. The ones we observed were hard workers and high spirited. They were happy to be alive; happy to be part of a secure family, happy to be gainfully employed and happy knowing they had a future. From my observations, they worked in teams of two from sampans, beautifully made boats by skilled craftsmen, made of dark wood, maybe mahogany, varnished and polished to a high sheen. They meticulously kept their sampans clean except for paint chips and dirt while working on the side of our ship. They paid no attention to the sailor’s cat calls or other diversions. In the early evening, they would put up their canopy which gave them some privacy and sail back to Hong Kong. Apparently they lived on their sampan because later they would return and anchor by our ship while they slept. Then before most of the crew was up in the morning, they were back at work.

The story about Mary Soo was that she grew up orphaned, on the streets. As a young girl, she was befriended, like a sister, by Navy sailors from a ship stationed in the Western Pacific that made regular stops to Hong Kong. When she learned about the excess food, she figured a way to stockpile for needy times. She expanded that to other ships. Someone decided she should earn the food and got her into chipping and painting ships where she excelled. She developed that into a thriving business for both herself and the girls she added to her family. She required that they not engage in prostitution. Nor could they date sailors without her permission. Part of her story is that she received a medal from President Harry Truman for her actions in Hong Kong when it was occupied by the Japanese in World War II. I could not verify that in my research or what it was awarded for. Mary Soo’s death was reported worldwide as the Garbage Queen of Hong Kong.

Hong Kong was a great liberty port, and our crew took advantage as much as they could. Highlights included enjoying the sights and sounds and smells with crowded alleyways thronged with thousands of people. Venders who loved to haggle and underbid each other in alleyways and markets. Jau Gwej food cart vendors and restaurants. You could walk into a tailor shop in the morning, be measured and then return the next day for an expensive looking suit that fit to the “T”. The same suit that would have cost several hundred dollars in the states was available there for $20. Almost everyone bought fancy monogrammed shirts and handkerchiefs to bring home. Jewelry and everything you could think of was incredibly inexpensive. There were three tours everyone took. One took you past enormous skyscrapers, showing how people lived in Hong Kong and neighboring villages; ending up on a mountainside overlooking a plain leading to the chilling Communist border which you approached at your own risk because of aggressive guards on the Chinese side. Another was the Peak Tram which took you up Victoria Mountain for a specular view of Hong Kong. The third involved an hour ferry ride to Macau, known for fantastic food, gambling and other vices.

On July 1, 1997, Hong Kong’s sovereignty was transferred from the United Kingdom and Republic of China (which had moved to Taiwan) rule to the People’s Republic of China (Communist). This officially ended 172 years of British colonial governance of Hong Kong, except for Japanese WWII occupation. As the last United Kingdom colony, the loss of Hong Kong was the end of the British Empire. Although still operating as a free port, Hong Kong’s future is uncertain.

Dale G. Potts has organized and MC’d Tualatin’s Memorial Day observation for the past 12 years. He is a Navy Vietnam vet, serving as the Public Affairs Officer of the Aircraft Carrier USS Yorktown. After active duty, he remained in the reserves, retiring as a Navy Captain (same rank as an Army Colonel). His civilian career was primarily as the Oregon Public Affairs Officer for IRS.